Welcome to "Alcatraz Now" Nothing Left Behind!

Alcatraz Now, a business of Columbus Cyclery LLC, has partnered with Alcatraz Cruises to promote and sell Alcatraz Tours to its San Francisco visitors.

Since 2011 Alcatraz Now has sold thousands of Alcatraz Tours.

The Golden Gate Bridge was first constructed on January 5th, 1933 and finished on May 27th, 1937. When it was completed, it was the longest suspension bridge in the world, spanning approximately 9,000 feet over a 400-foot deep strait that marked the entrance of the San Francisco Bay from the northern tip of the San Francisco peninsula to the southern point of Marin County. 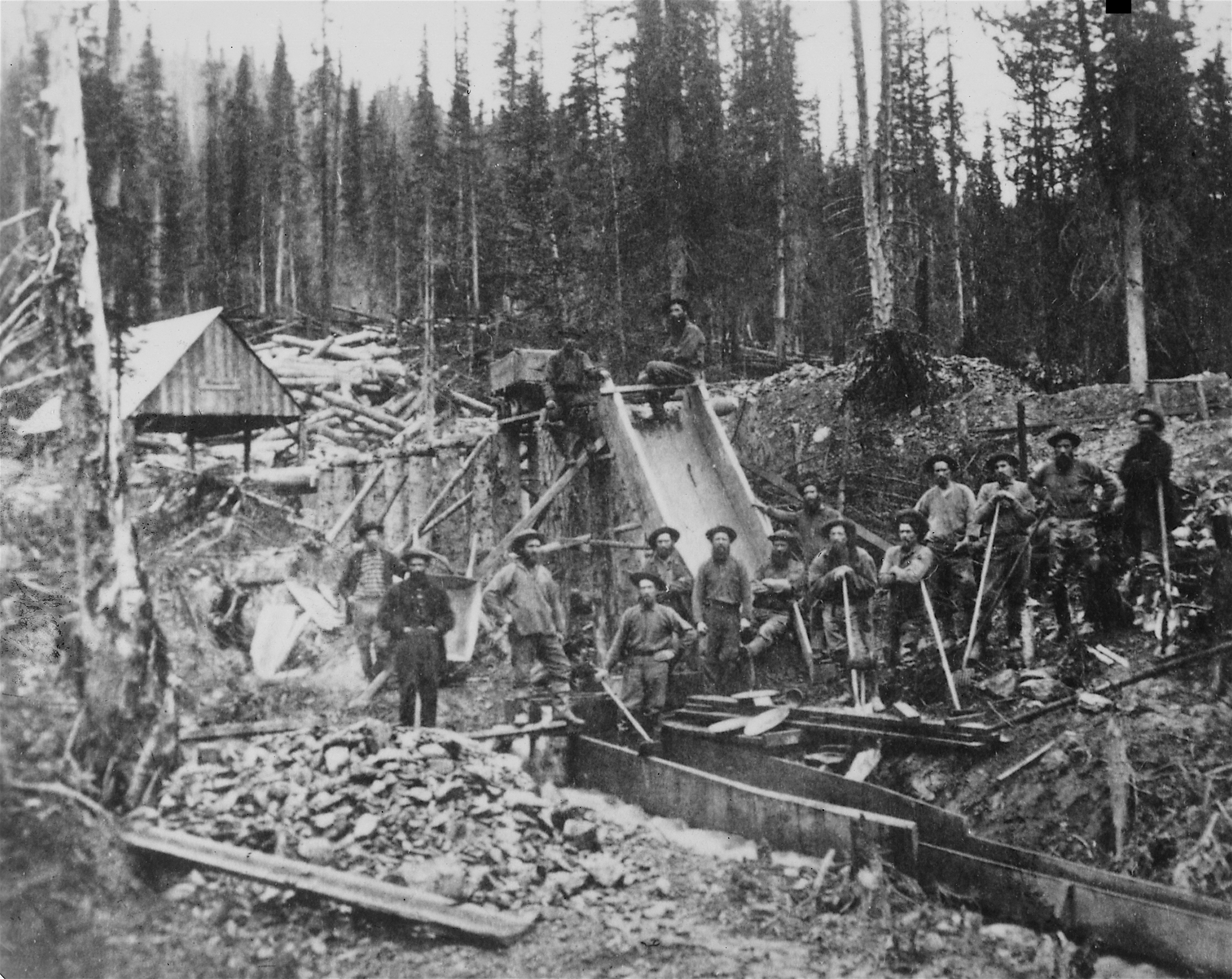 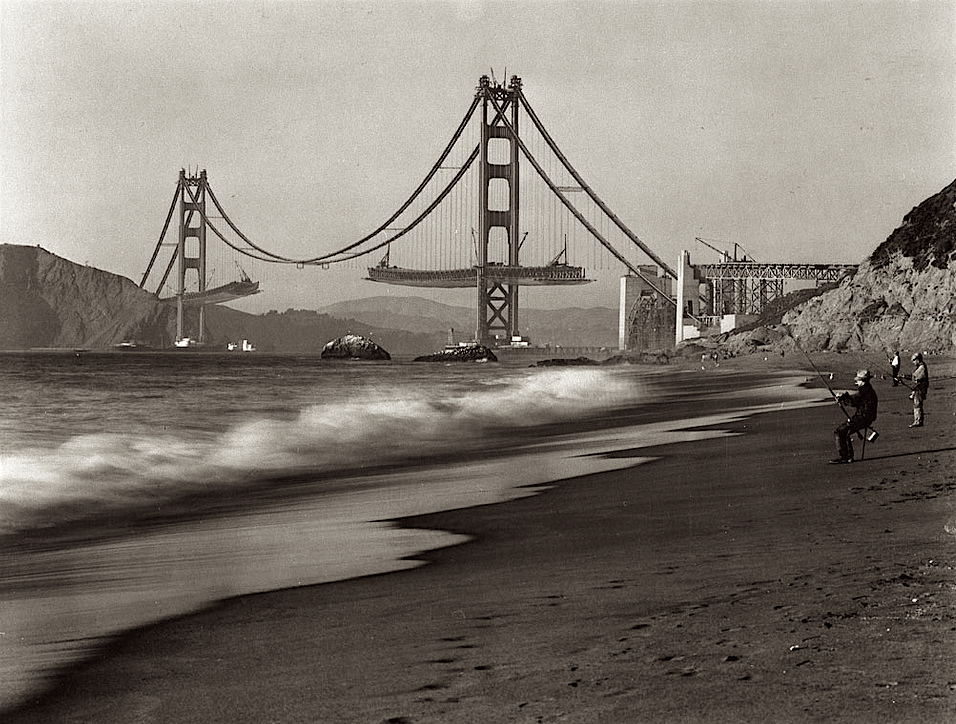 On May 27th, 1937, the Golden Gate Bridge was completed for a total of $27 million ($1.3 million under-budget and ahead of schedule). A total of 11 workers died during its construction (10 from the same incident when the scaffold holding them fell due to faulty supporting bolts and the safety net was not strong enough to bear all the weight, leaving them to fall 200 feet into the water below). Spanning a total length of 8,981 feet across, and 220 feet over the water, the Golden Gate Bridge was the largest suspension bridge in the world at this time. Its two main cables that pass through its two 746-foot towers are made with 27,572 wires each, measuring out to 80,000 miles of wire. The color of the Golden Gate Bridge is an orange-vermillion color called “international orange” to help with its visibility in the fog. 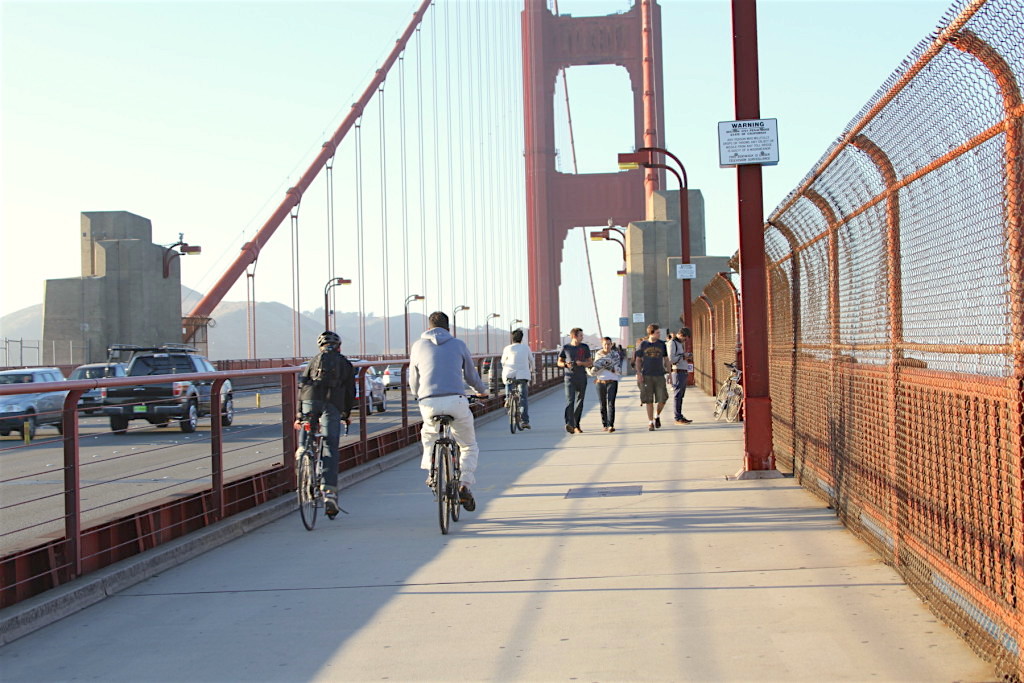 Since its completion, the Golden Gate Bridge has been an iconic landmark for San Francisco. The Golden Gate Bridge remains one of the most photographed bridges in the world and allows for cars (approximately 110,000), people, and bicycles to cross this bridge each day. 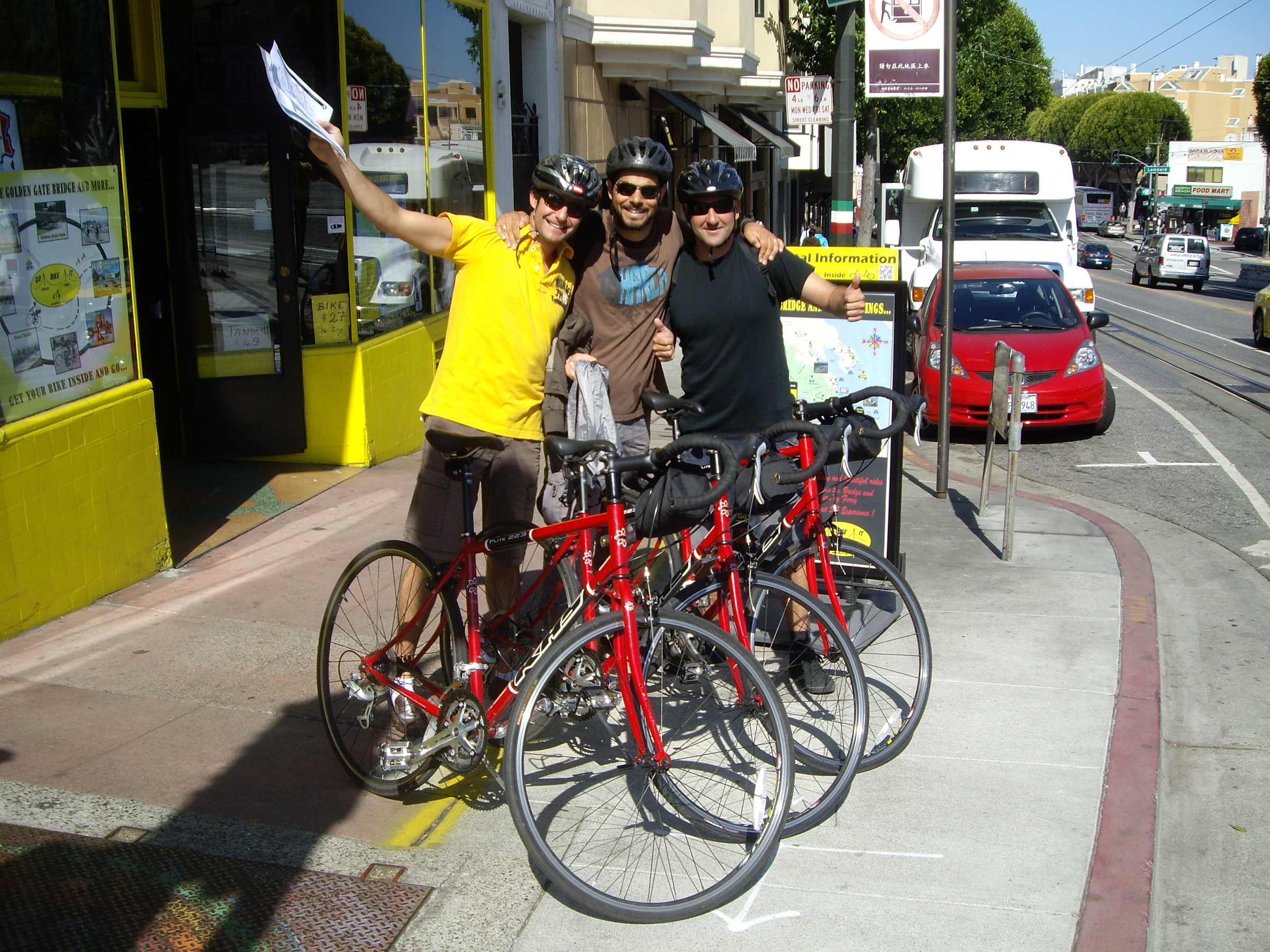 Columbus Cyclery is conveniently located in North Beach San Francisco, just a few blocks away from Fisherman’s Wharf and ten minutes from the bicycle path that takes you across the Golden Gate Bridge.

We have bicycles of all sizes and all types including comfort hybrid bikes, road bikes, mountain bikes, electric bikes and tandems.  For the smaller ones, we have kids bikes, tag-alongs and even trailers.

The ride from the bicycle shop to the bridge is a family-friendly ride, consisting of a five-mile ride almost entirely of a leisurely bicycle path. 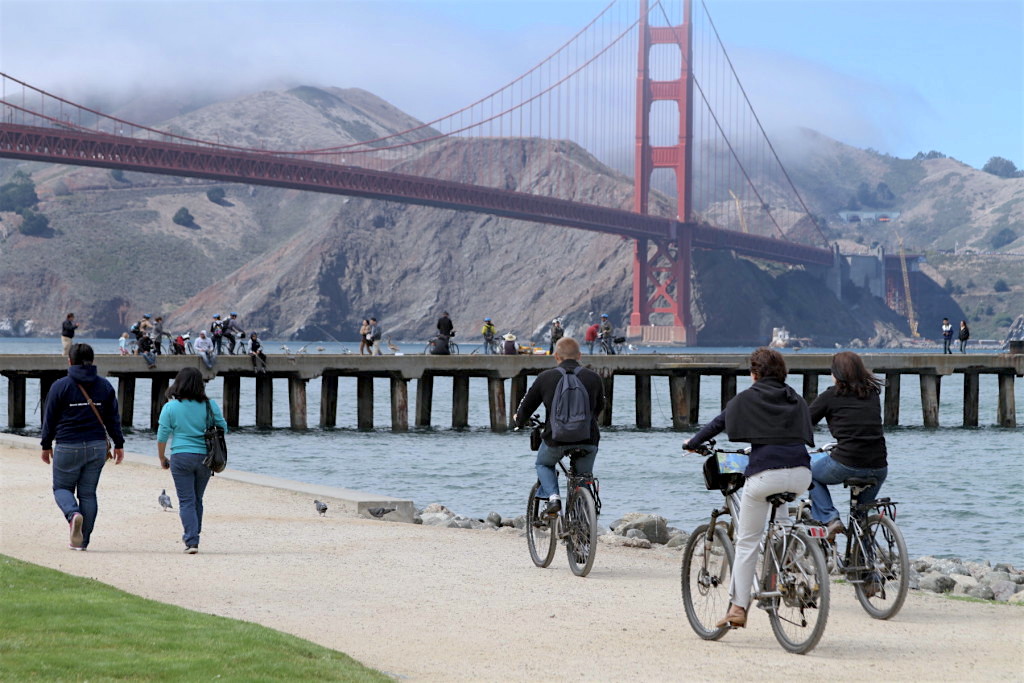 While the ride across the bridge to Sausalito is easily done on your own with only 8 miles to go, we do have a guided bike tour in July and August leaving our store at 10:00 am daily (please arrive 15 to 20 minutes before 10) and lasting about two and a half hours.  Once in Sausalito, you are on your own.  The options are numerous such as: continuing further to Tiburon (another 8 miles) and coming back to San Francisco on a commuter ferry boat, visiting the Sausalito houseboat community, exploring the marin headlands, or heading back to San Francisco riding your bike or via ferry boat.  You have the bike until 8:00pm.  Guided Tour is $70.  Again, guided tour is July-August exclusively.

For the period September to June, the Bike Tour is Self-Guided exclusively.

Self-Guided Tour:  Just call the Shop in the morning to reserve your bike (Important), and it will be ready for you to pick-up.  Plan on 2 to 3 hours to cross the Bridge and back, or more if you want to see other areas.  Self-guided tour is $29.00

All our bikes come with a lock, a helmet, a map and a flat repair kit.